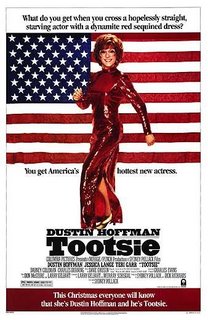 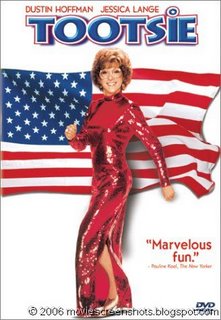 Plot summary:
Dustin Hoffman (Agatha, All the President's Men) stars as Michael Dorsey, a down-and-out New York actor that can't find a job, mostly due to his reputation for being difficult to work with. Fed up with being unemployed, Michael employs some desperate measures whereby he dons a wig, make-up and dress in order to try to land a meaty role on a popular soap opera meant for a woman. Sure enough, he gets the gig, and his uncouth adlibs make his new persona, Dorothy Michaels, a national sensation. Fame finally comes his way, but with a price, as he finds working with a woman he comes to love, a fellow actress named Julie (Lange), hard to bear, as he has feelings for her he dare not express as a woman. Meanwhile, the men are after her, and Michael is having a hard time trying to fend them off forever. [source: qwipster.net]