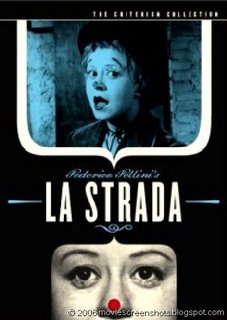 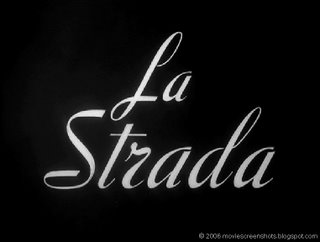 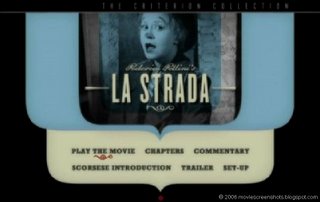 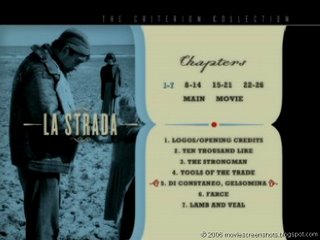 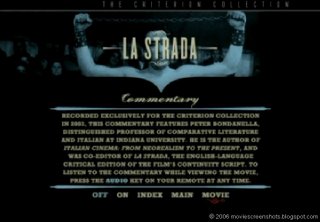 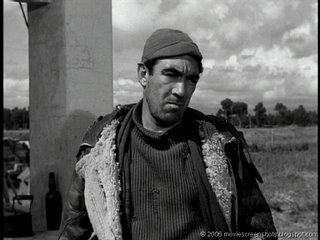 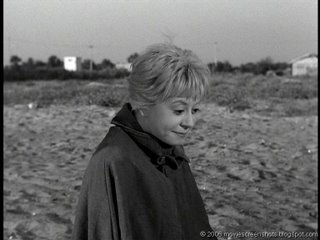 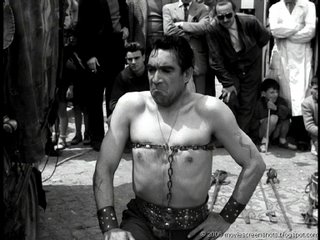 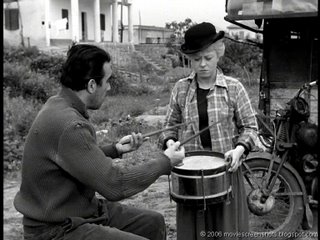 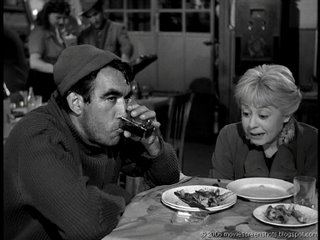 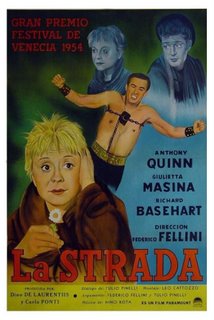 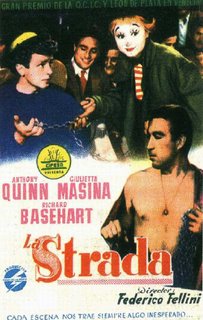 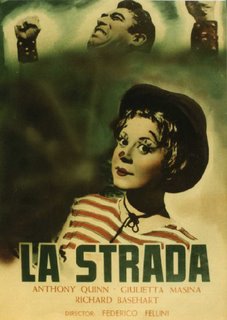 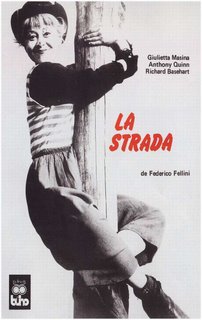 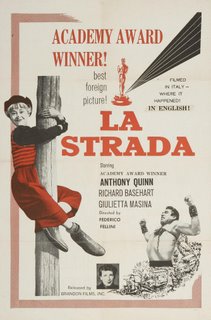 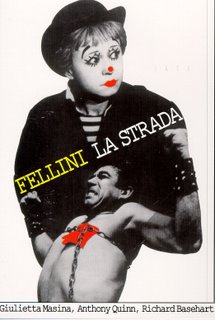 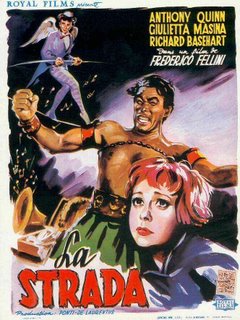 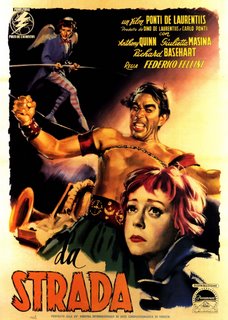 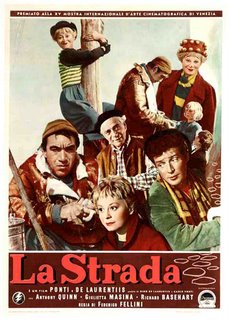 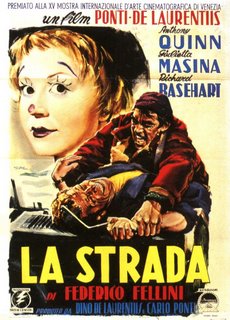 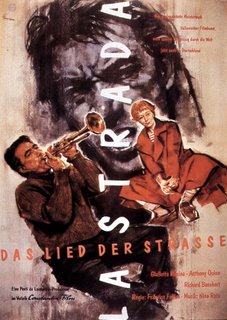 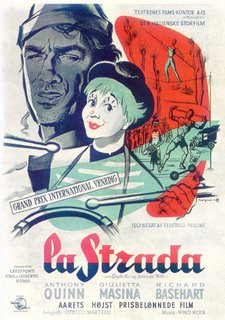 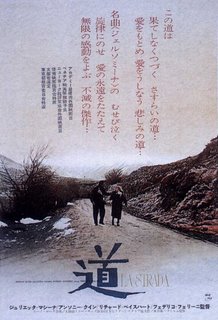 The Story: The story begins on a beautiful sandy beach where water, sky, and sand all seem to stretch into eternity. There we see the diminutive figure of Gelsomina (Giulietta Masina) walking in solitude. Gelsomina is a simple and dim-witted girl who nevertheless possesses a keen wonderment and appreciation of the beauties of nature. She is a daughter in a large fatherless family. Her mother is barely able to feed them all; money and fewer mouths to feed are the family necessities. This is the day when Gelsomina will be sold by her mother for 10,000 lire to a man named Zampanò. Her eldest sister, Rosa, had been previously sold to Zampanò and had died in his care (we never learn why or how), so Gelsomina’s future seems precarious indeed.

Zampanò (Anthony Quinn) is a coarse and beastly kind of man. He makes his living as a strongman, touring Italy to participate in carnivals and circuses. His pathetic act consists of breaking a chain by expanding his chest muscles, while blustering about how he might go blind or how blood might start gushing because of the danger inherent in this great deed. Although Zampanò clearly has more “street savvy” than the innocent Gelsomina, he is only marginally more intelligent. Worse, he is bitter and cynical and largely insensitive to his own nature or the universe that he inhabits. He is something of a one trick pony and one imagines that he long ago memorized the absurd patter that accompanies his act, probably having been taught it by some long-forgotten carnival barker.

Zampanò and Gelsomina travel together in a beat-up wagon pulled by a motorcycle. Zampanò treats Gelsomina badly, though it seems more from ignorance than conscious maliciousness. He is a brutish man who behaves like a canine and treats her like one as well. He needs an assistant and trains her to the task like one might train a dog. She learns to parade around in a clown outfit, beat the drum, play Zampanò's theme song on the trumpet, and to pass the hat. He abuses her physically and sexually, hitting her with a stick when she makes errors in her performance routine, berating her verbally, and forcing her to satisfy his sexual needs. Yet, what seems hardest for Gelsomina is his doltish insensitivity to both love and beauty. He exhibits no feelings for either people or the natural world. He seems to exist only to meet his own daily needs for food, sleep, and sex.

Despite his cruelty and insensitivity, Gelsomina is loyal to Zampanò and naïvely views him as a true artist and as her protector. In truth, she is protected more by her own limited intelligence and childlike innocence. Her bond to him is not so much like that of a battered woman to an abusive husband as that of a dog in a pack to the dominant pack leader. Lest there be any doubt about the feral nature of their relationship, Fellini drives home the comparison in one scene, after their performance at a wedding, when Gelsomina is seen competing with the family’s dogs for crumbs off the floor. Although Zampanò calls her his wife for show purposes during his performances, he evades discussing marriage with her when she inquires. On one occasion, he even flirts with a buxom woman right in front of Gelsomina and later unceremoniously dumps her by the side of the road so he can spend the night with his conquest. When Gelsomina tries vainly to communicate tenderly with him, he cuts her off and says that he wants to sleep. Later, however, when she is asleep, we see an exceptional glimpse of affectionate behavior from Zampanò, when he pulls the covers up over her. We thus learn that part of his mean exterior is that old macho fallacy that any sign of humanity or affection will appear to be weakness. Zampanò may actually have some crude capacity to feel, "but he can't say it because he's like a dog and just barks" (as it is later put by another character).

The dysfunctional relationship between Zampanò and Gelsomina is further destabilized when they encounter the Fool (Richard Basehart), at one of their stops. The Fool is a flamboyant high-wire artist who performs wearing wings and tights. He is witty but rude as well as a comedian and sensitive violinist. Gelsomina is immediately attracted to him because he possesses all the awareness and joie de vie that Zampanò is lacking. His joie de vie, however, is really more of a devil-may-care irreverence. He has a sadistic streak and uses his intelligence to mock Zampanò. The Fool and Zampanò are a complete mismatch, since one possesses all of the advantage of wit and the other all the physical superiority. Zampanò is taunted into attacking the Fool and is thrown into jail as a result. With Zampanò in jail, Gelsomina is alone and the circus offers to take her with them. The Fool inadvertently convinces her to stay and wait for Zampanò when he explains to her, "Everything in this world is good for something. Take . . . this stone, for example." She asks, “What's it good for?” The fool then adds, "I don't know . . . but it certainly has its use. If it were useless, then everything would be useless -- even the stars." Gelsomina sees a parallel between the stone and Zampanò – both are unaware of the world in which they exist. She knows that if she leaves him he will have no one. She decides to wait loyally for Zampanò. When he is released, they leave together.

On the road, later, they encounter the Fool and, in an altercation, Zampanò unintentionally kills him and then unceremoniously disposes of his body. This proves too much for Gelsomina’s fragile psyche and she becomes increasingly depressed. Zampanò abandons her on the side of the road while she is sleeping. Many weeks later, Zampanò regretfully searches for her but learns that she has gone mad. The film concludes with Zampanò sitting at night on a desolate beach staring out at the sea, feeling regret and realizing, perhaps for the first time, that he had something precious. Like many Fellini characters to follow, he has foolishly turned away from love and understanding out of restless preoccupation with selfish daily needs. [source: epinions.com]